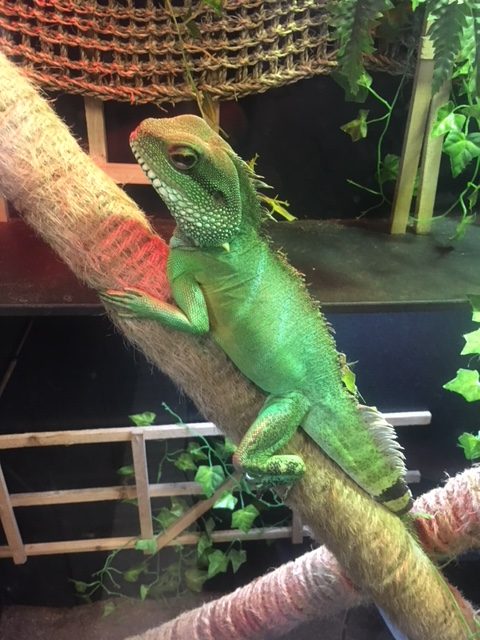 Narrative as Interpreter in Fiction Writing

When we’re talking fiction writing, what really is narrative?  It’s everything that isn’t action and isn’t dialogue.  Which means it’s the glue that holds it all together.

More directly, narrative is how we help the reader interpret the action and the dialogue.  We given them context on the history between two given characters – or two civilizations on different sides of a galactic conflict.  We give them clues to unravel the story’s mysteries.  We tell them who to root for and why.

Controlling the narrative flow in your story allows you to control how and when you introduce key pieces of information.   This makes all the difference in the emotions a reader feels as your story progresses, and whether or not they achieve catharsis (see the post I did on Catharsis).

Imagine you are writing an anthropomorphic story about the iguana in the opening picture.  Should you trust him?  Is he smart?  What does he want?  You use narrative to – hopefully subtly – fill us in on all those things — especially when they are at odds with his words or actions.

Information dumps are the equivalent of throwing a bucket of water into the reader’s face because they said they were a little thirsty.  You’re giving them too much information, too soon.  You haven’t introduced the actions and dialogues that need to be interpreted, so when you start throwing random facts that do not yet have significance in terms of the plot, they don’t “stick” in the reader’s brain.

The same thing happens when there is too much information all at once, even if it is relevant.  An interpreter guides you.  It’s like a docent at a museum.  Even if they spent the last decade studying the topic, they’re not going to tell you everything it took them years to learn in one hour.  You’d be so overwhelmed, you wouldn’t absorb the important points, because you wouldn’t know which points were important.

At the beginning of a story, you are trying to teach your reader the key points of the world/setting you’ve built and of your characters’ personalities.  It can bet tempting to present lists or dossiers or entire chapters dedicated to how things work.  But that’s the same as introducing a first year language student to a list of foreign language verbs and hoping that repeating the words a couple of time will have an impact.  That student will learn much better if the verbs are introduced one at a time, in context, and used to fulfil an actual linguistic need (such as inviting a classmate to have coffee).

The same thing works in stories, even if you’re dealing with made-up terminology or tech.  You don’t need to explain the physics behind a warp vortex if you can just show it working, and give us the character that went through one for the first time and has come out shaking and somehow changed.  Showing versus telling comes into play big time here.

Don’t be afraid to show your character’s thoughts, or to explain their plans, because if we don’t know what is going on inside the character, we can’t fear for what might go wrong.

This is introduction of information before it is needed, to psychologically prepare the reader for a revelation later.  You should do this selectively, leaving a breadcrumb-trail of clues that will allow the reader to look back and see the revelation as a fact they should have seen coming, because of the subtle introduction.

You can do the same thing to set up a scene (often an action sequence or emotional turning point in two characters’ relationship) by “foreshadowing” the location where it will take place.  Have another scene take place in the same location, so that when the tension is high, the reader will already know the layout of the room, location of exits, etc.  Then you won’t have to interrupt the action to interpret the setting for them.

Foreshadowing should always be leading somewhere, or you will be muddying the narrative with facts your readers painstakingly learn – only to find out they weren’t on the quiz after all.  Do this too many times, and readers stop paying attention and/or close the book.  (See the post I did on Chekhov’s Gun for more information on this.)

The exception is when you are intentionally introducing “red herrings” (misleading clues), and the challenge is to figure out which ones will be followed up on.