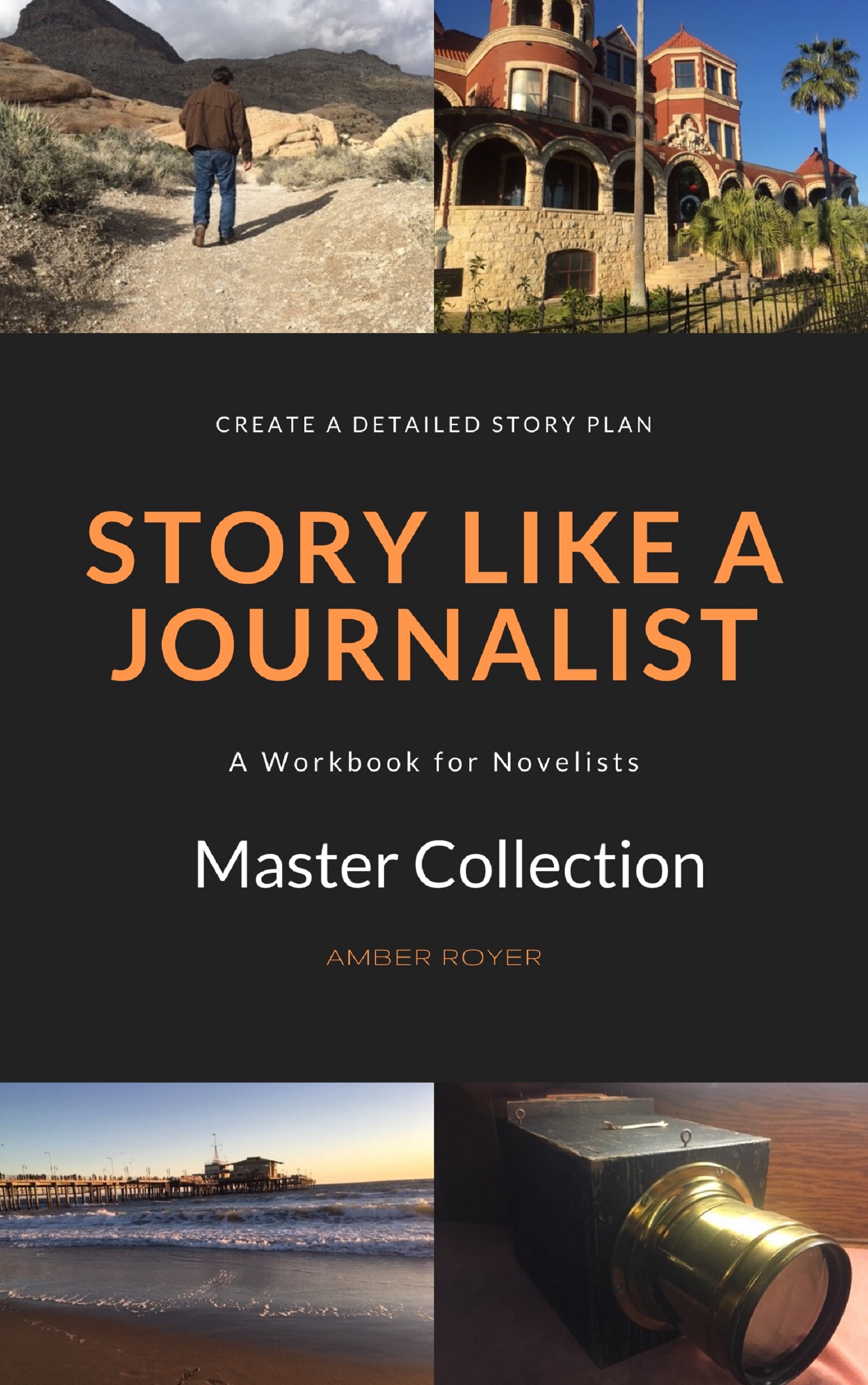 Want to write novels that feel real enough to the reader to have been ripped from the headlines, whatever your genre? Here’s a Master Collection Textbook / Workbook that can help.

The Story Like a Journalist series combines journalistic planning strategies and novel writing theory into a systematic workbook that takes you from determining the best protagonist for your story to imbuing your work with meaning. There is instructional material that will give you a basic foundation in creative writing craft so that you understand how to build an effective story with the information you add into the worksheets.

The Master Collection with give you access to all five volumes, for a total of over 100 worksheets.

Get ready to get organized and plan your novel. Having a plan in place for how you will approach your project can save you time and minimize the need for re-writes. But where to start, when maybe you’ve just got a couple of characters standing around, and a vague idea of where you want the story to end?

You need to generate ideas — and then set limits on those ideas. Otherwise, once you unlock your imagination, you can get overwhelmed by the sheer possibilities presented.

Making decisions early in the process — on the type of story you are telling, on how many of your fictional people are telling the story, on whether they are telling it in the now or distant past — can actually work to reduce anxiety as you write. Start determining boundaries and setting rules, and suddenly you have a list if right answers to look at when you’re not sure how to handle a particular scene. Same goes for specifics about the story. Character names, places they live — narrowing things down takes the pressure off.

Story Like a Journalist Vol 2 – WHO Relates to Character

Get ready to take a deep dive into the concept of character. WHO are these people who’ve showed up demanding a place in your novel, anyway? You know they have a story to tell, and for some specific reason, you are the writer in the best position to tell it.

Maybe the character has many qualities similar to you. He grew up in a factionalized version of your hometown. He shares the same occupation or favorite leisure activity as you. Of course you’re prepared to tell his story. Maybe. But if you are that close psychologically, it can be hard to allow the character to be his own person. You may need to set some boundaries, so that the character can react consistently the way HE would to any given situation. It can be a bit of a shock when a character you identify with needs to make a hard decision for the plot, or chooses to do something you would never do. But that’s what fiction is about: seeing what happens when characters make decisions and face uncomfortable situations. Take the time to really develop the character. By defining the similarities and differences, you may even learn a bit about yourself.

Or maybe the character that you keep coming back to is a 9-foot tall alien from the planet Kevhkeh. On the surface, her life is nothing like yours. She rides a giant bird to work, and spends most of her day telekinetically weaving art rugs. Where would you even start understanding how she would react to things? But underneath those surface details, she could have a great deal in common with you, on an emotional level, or in terms of her frustrations in life or her dreams. After all, there’s a reason your brain chooses certain stories to tell. By delving into her psychological makeup, you can find ways to relate to this character, so that when you write her, her emotions are spot on.

Story Like a Journalist Vol 3 – WHAT Relates to Premise

Get ready to explore the concept of premise. After all, it can be hard to define what your story is really about. You need a keystone to hold onto, so you don’t get lost in all the things your story COULD be. Premise is your keystone, and it works like the legend for a road map. Get that set up wrong, and who knows where you’ll wind up.

Premise gets discussed mainly in the context of marketing — how to pitch your story to an agent, or how to write copy that will draw readers to your book’s Amazon listing. But your premise is more than just a marketing tool. The reason publishing professionals want to hear your premise is because it tells them everything they need to know about your story.

It tells them what your story really is. If you can’t explain your story with a compelling premise statement, the story itself probably isn’t focused enough to form a compelling novel, because you haven’t found the heart of what your story is ABOUT yet. Which tells you how valuable a well-developed premise becomes when you start writing your novel.

Maybe you have characters showing up and being interesting people, but their actions don’t add up to any one thing.

Maybe you already have a premise for your story, and you want to explore the deeper implications of it.

Get ready to take dig into the concept of setting. WHEN and WHERE the heck are your characters? They have to be somewhere, waiting for the story to start.

They could be out there, somewhere in a version of the real world. There is a great deal of appeal to writing realistic settings, creating stories that are as close to real life as possible, allowing us to believe that these characters live just a few cities or a couple of states away. These are stories that could really have happened — could even have a true story as a core. We want to keep coming back for new books set in a realistic series world because we want to feel like we are visiting our neighbor.

Or your characters could be hanging out in a spaceport or a tavern, in a world only tangentially connected to our own. The attraction here is to the ability to tell stories that are larger than life, and provide a true escape for readers. These are stories on the scale of myth, built on surprise and excitement. Sure, your characters don’t live where we do — but we’d like to be able to visit where they live. (Or not, if you’re writing a truly dangerous world. We’re good, really.)

Or they could be stuck in the past, waiting for you to look back and find them. The appeal could be the element of nostalgia that comes from writing about a theoretically simpler time. Or the challenge of researching deeply enough to truly understand what was life was like at a certain point in history — sanitation issues, crime rate and all. These stories have a kind of gravitas to them, and can accommodate a perspective that lends itself to reflection and re-evaluation.

Or they could be on the other side of the world, or . . . anywhere, really.

Get ready to delve into the concepts of plot and theme. These two concepts are so intertwined that it makes sense to discuss them together.

A plot that doesn’t build to a theme is hollow — no matter how much excitement you build into the on-page action, there’s no substance. Which means the story won’t be memorable.

A character contemplating a theme without the framework of a plot is drifting — no matter how much she has to say, there’s nothing concrete to prove her points or to challenge them. Which means there’s nothing to hold onto, and her ideas just slip away.

But when you get plot and theme working together, you can build a pattern of events and meaning that will touch our emotions and maybe even change the way we think.

Unlike real life, where things just happen and we have to search for the meaning we can take from events after the fact, you can build meaning into your plot right from the start, teaching the character a new way of thinking about life as the events progress.

NOTE: The e-book version of this workbook links to printable versions of the worksheets. The page count is therefore different than the print book.

Hemmingway worked a newspaper journalist before he became a fiction writer. E.B. White did a stint at the New Yorker. L.M. Montgomery was a reporter in Halifax before tackling Anne of Green Gables. Margaret Mitchell got her start as a reporter for the Atlanta Journal Sunday Magazine. What these writers have in common: an excellent sense of character, and the ability to write clean prose that clearly puts forwards the characters’ goals and motivations. This ability may well come from having mastered the journalistic art, which emphasizes creating a sound story that balances logic, research and emotional authenticity.

Even if you’re working in a purely creative world, you can still use those principles, and learn to organize and research like a journalist, and to ask the questions a journalist asks either before or after you write your story.