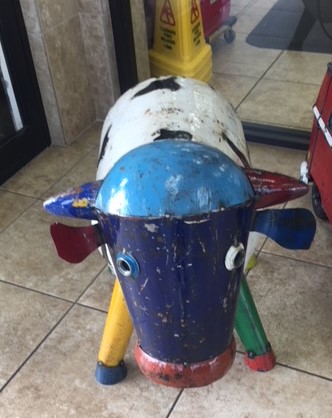 One of my favorite books from the Children’s Lit classes I took in college was Treasure Island.  Stevenson stuck with me as an example I wanted to emulate, because nothing in that book is wasted.  Every piece of foreshadowing pays off, every bit of character development comes into play by the end, and the father-son relationship between Jim and Long John Silver is so cleanly developed and then thoroughly tested – it makes me a little jealous, actually.

And it brings to mind the concept of Chekhov’s Gun.  This advice dates back to the 1890s, but it is even more relevant today, when we are writing for readers who have so many other demands on their attention, that they resent feeling like we are wasting their time.

“If you say in the first chapter that there is a rifle hanging on a wall, in the second or third chapter it absolutely must go off. If it’s not going to be fired, it shouldn’t be hanging there.” – Anton Chekhov

Anton Chekhov was a novelist, but he was also a playwright, which I think helped him put the concept in such visual terms.  Think about it.  When you go to a play, often the whole thing takes place in one set – one place, one room.  And everything that is going to be used by the actors – other than what they carry on stage – is already in place.  We expect that if it was important enough for the set designers to include it, it will be used at some point.  And if the actors call attention to it – fiddling with a phone cord, or flipping a record on a phonograph, it’s a subtle clue that these objects are going to be important.

Chekhov asks us to translate that to the world of the novel, where the only objects the reader sees in a room are the ones the writer calls attention to, either in the narrative description – or through the eyes of the characters.  (What a character notices gives the double punch of adding a layer of characterization at the same time.)  Obviously, not everything can be of heavy import, or else our books would be either enormous or filled with white rooms.  If a character walks down the street and notices ten things, it becomes a blur, and you can intentionally bury the important object in a list.  People will pay the most attention to whatever is mentioned first and last.

Anything that gets mentioned more than once is going to feel extra-important.  Anything dangerous – a bottle of poison, a toddler playing unmonitored by a swimming pool – is going to make the reader worry, until the object is used or put away, or the situation resolved.

This goes doubly for objects – even if they’re not dangerous – that call to a character (“I will fly the red spaceship,” she thought. . .) or that a character hides (She tucked the letter into her ledger book when he walked into the room. . .).  And triply so for objects that shouldn’t be present, given the time period, genre or setting (a car in a medieval setting MUST be explored).

There are exceptions to all rules, and it is no different here.  In some genres, readers expect false clues, often called red herrings.  Writers there get to call attention to a number of unimportant thing.  So metaphorically,  instead of leaving one gun on the wall, you decorate the wall with guns and challenge the reader to figure out which one is actually loaded.  Rather than being let down that the others didn’t go off, we as readers feel smart for solving the puzzle.

Characters themselves can also be “guns,” especially if introduced in the first couple of chapters.  That’s when we’re getting to know who’s who and who we’re supposed to get attached to and who we’re supposed to hate.   If there’s a kid playing in the yard across the street, and a character goes outside to tell them not to play in the street . . . you can’t just have that kiddo listen and never show up again in the story.  We’re going to worry for the rest of the story when that kid’s going to get hit by a car.  If that’s not where you’re headed, you have to make it clear soon after the kid’s introduced that you are actually doing something else with his character.  But if you don’t do it right, we may still worry for him.

On the other hand, the barista that hands your protag and your antag their cups of coffee when they meet up to try and find peace – the reader would be surprised to ever see her again.  Which means that if they do, it can legitimately twist the plot.

That doesn’t mean that what you do with these objects or characters has to be predictable.  In fact, we’re more impressed as readers if we think we know what the object is going to be for, or where a character is headed, and the writer surprises us with something completely different.  The key is that it still has to match what’s been set up.  In the best case, it becomes the sought-after surprising yet inevitable.

You can also use this concept when you introduce symbols or images.  Don’t simply give us an image once, but echo it, alter it, intensify it throughout your manuscript.

Intentionally thinking about how you are introducing people, concepts, and information can tighten up your writing, and move you closer to a manuscript where nothing is wasted.

If you are looking for a deeper discussion of what the reader expects from how things are introduced, and happen to be in the Arlington, Texas area, the Saturday Night Write group will be discussing Promises, Promises on February 17, 4-6 PM at the Flying Fish Restaurant.  It’s always free and open to everyone.

NOTE: The image was taken at a Buckee’s in Temple, Texas.