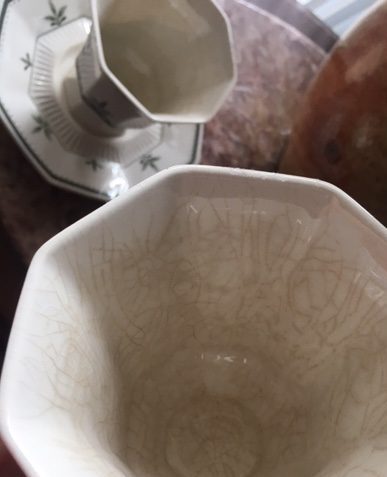 Kintsugi and The Fine Art of the Character Arc

In real life, we resist change.  But our characters get pushed to change by the plot.  Some characters embrace change, and are more than ready to undertake a hero’s journey. Typically, though, protagonists don’t like change – especially difficult, painful change — any more than you do.  But you have to ignore their protests and shatter them, so that they can be put back together at the end of the journey as someone more whole, that “master of both worlds” who can understand the meaning of the events they have been a part of.

(Unless the piece is a tragedy, in which case, the character stays shattered, and the beauty is in watching the pieces fall to the ground and make a pattern on the floor . . .)

Typically, though, we authors pick those scattered pieces up with care.  When the hubby and I visited Tokyo, we discovered kintsugi (golden joinery).  This is a method of repairing literal shattered pottery, in which gold is mixed with a special lacquer and used to glue the pieces back together.  MyModernMet.com says, “This repair method celebrates each artifact’s unique history by emphasizing its fractures and breaks instead of hiding or disguising them. Kintsugi often makes the repaired piece even more beautiful than the original, revitalizing it with new life.”

To be honest, I can’t entirely take credit here, because I recently heard someone compare that to people, saying that if you make a mistake or fail in some way (even seriously) you can find that new beauty in learning from it, becoming a stronger and sometimes better person.  But ever since I heard that comparison, I’ve been thinking about how kintsugi vividly illustrates character arcs.

It is never fun to be the protagonist of a novel.  People are always trying to take something away from you – love, your job, even your life, depending on the genre.  I like to sit down with my main characters in a mental “white room” and interview them (you can find several questionnaires to help you do this in the resources section of my site).  I ask questions that let me know what brings them the most joy in life, what they are afraid of, the deepest ways I can hurt them, and what they want out of life before they die.  Especially if the character is going to die before the story ends, I try to make a list of ways I can honor their wishes by giving them at least some kind of victory before the plot kills them.  But I make a similar list for my protag.  This is their book, their journey, and I want a solid idea of what they need out of it.

At the same time, novels run on frustrating the character, on making them face setbacks, failures and losses.  So that same list that tells me what they need also tells me the most effective things to threaten.  The highest stakes in a story should never be your character’s life.  The desire to simply live is usually not enough to invest us for the length of the novel.  But threaten the life of someone the character cares about (either instead of or alongside threatening the character’s death) . . . and instantly the stakes become higher.  Readers invest just as highly if you threaten the character’s emotional security, moral code, friendships or heart.

The whole Hero’s Journey tests the character, until finally at the dark moment (apostasis, or symbolic death) they break.  And for half a breath, the reader gets to see the world as it would look like if the character failed.  It is in that moment of shattering, in the pause it forces, that that character arcs.  The character was one person at the beginning of the story, and once they are glued back together (coming out of apostasis with the clarity needed to finally solve the plot problem, with all the power of symbolic resurrection backing them) they are a new, better version of themselves.  (Sometimes a worse version, yes, I know.)  And if you imagine the marks your specific plot events have put on this character as outlined in gold, it can help you visualize HOW the character has been changed.

No matter what the character started as, they will now be completely unique.  After all, even if a vase was mass produced, it won’t shatter the exact same way as any other vase. (The two cups in the pic above are from the same pattern, but the fractures already forming inside each are clearly different).  And the hand of the artist putting it back together will show (check out some of the example pics in the MyModernMet article – several if them have replacement pieces that obviously came from a different piece of pottery, one a huge patch of gold where a replacement maybe couldn’t be found, or was too thin; sometimes the work is done with silver or platinum instead of gold).

In real life, people tend to hide the cracks and scars from what they’ve been through, so they don’t stand out as different.  But in a book, that just leads to the character feeling generic, and even worse, your voice as an author being muted.

One way writers tend to work with something “mass produced” is when they look to archetypes, which are a handy shortcut to developing a core character personality.  Sometimes, this leads to work that feels cliché – which usually means the author hasn’t shattered the original piece enough (and definitely not added in new pieces – one of the quickest ways to get something interesting is to mash together two archetypes in one character).  If you are in the DFW area, join us at Saturday Night Write on Saturday, April 20 for a discussion of Archetype vs. Cliché.  We meet 4-6 PM at the Flying Fish in Arlington, TX.  Free and open to all.