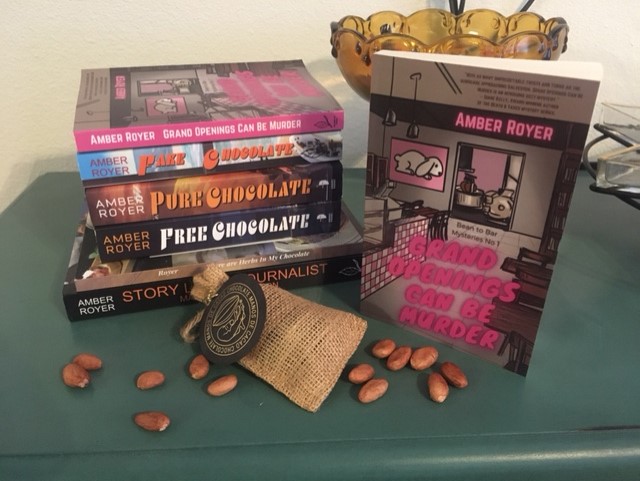 Here it is, the night before my first cozy mystery comes out. This was a fun one to write, and it got me thinking about how story is story, no matter what the genre. Because story always comes down to people, and human nature is the same, whether writing someone who comes from the area where I grew up, or the other side of the world, or the other side of the galaxy. I learned a lot about psychology and writing consistent characters from doing the Chocoverse Trilogy. After all, you have to make your 7-foot tall snake guy psychologically “human,” or else there’s now way people are going to connect to why he’s upset or happy. And they’re not going to care about him.

And writing a cozy mystery makes parts of the book basically write itself. You have to introduce the sleuth, introduce the suspects, add more of an element of danger, and solve the puzzle. Justice restored. Everyone lives happily ever – erm, until the next unexpected murder. In a way, that stricture is freeing. Because I wasn’t focusing so much on worldbuilding, or shaping the direction of the plot, I could really focus in on character. (I am in no way saying writing a mystery is easier than writing a space opera – that’s like comparing growing apples and manufacturing flat screen TVs – each genre has its own challenges – and its own rewards.) But because I was focusing in on character and voice to make my mystery stand out from the pack, I went into writing Grand Openings Can Be Murder with definite ideas on how the characters would think about justice (aha! Intentional theme!!) and how they would be changed by the events (characters arcing, dealing with the wound and the lie). Which gave me a solid base to write from, and actually made the book pretty well put-together on the first draft.

While I’ve been promoting the release of Bean to Bar Mysteries 1, I’ve been working on an outline for a project back in the sci-fi genre, and I realized I’d actually learned a bit about simplifying the way I create plot. Instead of competing for my brain space, the process of writing back and forth between genres seems to be giving me better tools for writing from both sides.

One thing I’m really liking about writing mystery is how readers expect a set of series characters they can get attached to. I’ve already drafted Book 2 in the Bean to Bar Mysteries, and I have so many ideas for how to develop these characters. Despite the fact that they’re dealing with grief and remorse – and being falsely accused of murder – the people in my fictional version of Galveston are still a fun bunch to hang out with. They have good hearts, and complicated friendships – and they want things to work out for the best. I hope my readers have fun hanging out with them too!