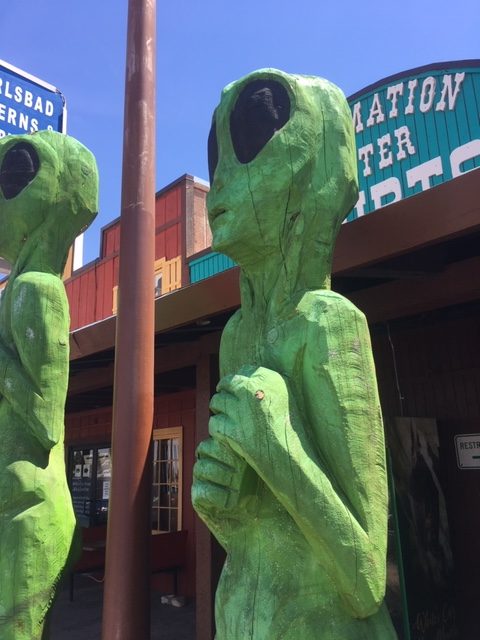 The Power of Lists

I’ve talked before about the power of What If questions when it comes to creativity.  What I want to talk about today is related: the power of making lists.

Lists force you to move past the first idea that pops into your head in answer to a What If question.

When I get stuck, I like to pose myself a question.
Okay.  Vghex is an alien who just crash-landed on Earth.  His ship doesn’t work.  He’s an eight-foot tall dude, who looks a bit monstrous.  What is he going to do?

A few obvious solutions pop into my head.  But if they’re obvious to me, the solutions will most likely be obvious to the reader.  So I decide to make a list of 10 possibilities.

The number ten is important.  You can see that the first three or four ideas aren’t really getting past the obvious.  Even if number 4 has a quirky character, who popped up out of nowhere, it’s definitely not the most creative possibility on the list.  Once you start getting past 5, you have to start thinking harder, and it shows.  The elements you used for earlier parts of the list may collide with some of these other ideas, springboarding you into different directions.  By the time you get to ten, you will likely have come up with several ideas that could be worked into different stories.

Or – you might be able to make a more complex story by combining them.  The story here that I’m most likely to write is either #7 or #10.  But there’s no reason that the characters from #4 and #6 couldn’t both show up in story #7, if it is set in the near future, or in modern day.  You could use variations on these characters for #10, changing the car to a horse and cart, and changing the reason the grandma believes this guy is from another planet – which could add an interesting wrinkle to the story as you incorporate the history of astronomy.

This works to generate an entire story from a single starting point, but you can also make lists on how to deal with smaller stuck points in your story.  You know that your character has to make a decision at your stuck point.  And you know that later, the character winds up leaving town, to either chase something or run from something, so that she can get to the town where she meets her love interest.  What decision does she make?  And how does the fallout from that leave her running or chasing whatever it is?  Make a list of ten possibilities, and you’re found to find something that works.

If you would like to learn more about Generating Exciting Plot Ideas, join us on Zoom for this month’s Saturday Night Write session on Saturday, September 19, 2020.  More information is on the Facebook Event.  Free and open to all.

Note: Photo is from our 2018 trip to Carlsbad, New Mexico.