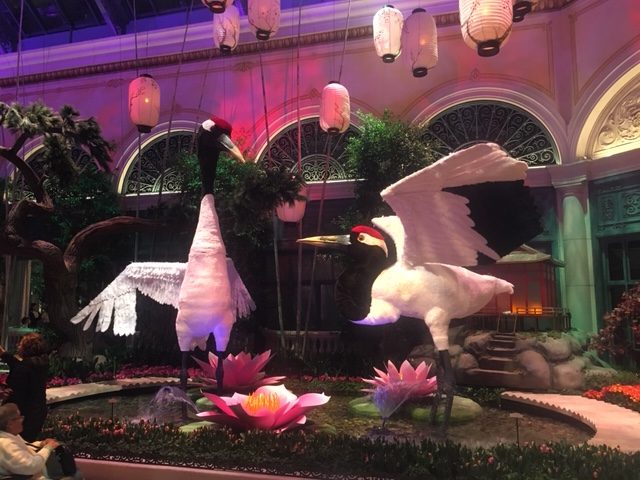 When I start talking about literary devices in my writing classes, the discussion inevitably comes around to whether or not the authors of various works were using them intentionally – or if these literary effects came about by accident.  I believe that it is a combination of both:  often I don’t see that something has become a symbol until I am mid-way through a manuscript, or even until I’m proofing back over a manuscript in preparation for editing it.

How many different potential symbols could you find in the pic accompanying this post? The giant red-crowned cranes? The water lilies — or the water itself? The lights? The windows? Almost anything can become a symbol, if you attach meaning to it.

Whether you plan to introduce symbols or if you find them after the fact, you can take control of the symbols in your work and use them in several ways.

1.   You can introduce a symbol in the first chapter of your manuscript that will help bring things full circle.  Choose an object/creature/etc. that is associated with the theme.  Then bring that symbol up again in the last chapter of the manuscript – showing how your protagonist has embraced the theme.

Ex. A dusty teapot is shown on the shelf of your character’s great aunt’s home symbolizes friendships past when your protag comes to town to sort her relative’s belongings.  At the beginning, she doesn’t intend to make friends in the town.  Thinks, in fact, that friends are a waste of time.  At the end, she’s sitting around the table with all her new friends, serving tea from the pot.

2.  You can repeatedly reference a symbol so that its meaning changes over the course of the manuscript.  Each time you bring it up, it should riff on the meaning in a different way.

Ex. It is fall and the character is repeatedly shown raking leaves and having new leaves blow in almost immediately.  At the beginning this is symbolic of the recent loss the character suffered, when his son died in an auto accident.  Later, it becomes symbolic of the futility the character feels in the weeks after he retires and fails to find new purpose in life.  And further in, of his frustration when people refuse to take him seriously when he decides to open his own business.  But by the end, it comes to mean he’s become okay with the ebb and flow of change in his life.

3.  You can use symbols as shorthand.  Something concrete stands for something abstract.

Ex.  You can introduce the idea that your starship captain’s command chair is a symbol of her authority.  Having that chair vandalized by a member of the crew would be an open act of rebellion.

4.   You can use a symbol to explain something powerful in a deeper way than a literal description could convey.

Ex.  You show that the kingdom’s princess has fragile health, and tie her to the symbol of a delicate music box.  She’s the only hope for your protag getting a pardon for his father, as no one else is sympathetic.  Instead of showing the princess’s death, show the music box shattering, and the last few moments of music playing as hope dies in your protagonist’s heart.

5.  Make them meaning of a symbol ambiguous.  Not random.  Readers should “get” it on a deeper, subconscious level, but find themselves mulling over the complexities of the meaning.

Ex.  A duck that keeps appearing in the manuscript.  When the romantic leads are arguing, it crash-lands in the pool, turning angry words into an uncontrolled giggling fit.  It nests on the car hood, keeping them from driving away.  And eventually, it flies away, into the sunset, following a new flock of ducks.  Is this a statement on the meaning of love?  If so, why did it leave?

If you want to learn more about symbols and other poetic language, come by the Flying Fish in Arlington Texas for our Saturday Night Write craft discussion on June 15, 2019.  We will be talking Seeding in Literary Devices to Make Your Story Feel Complete from 4-6 PM.  It is FREE and open to everyone.

Note: I took this picture in the Garden exhibit at the Bellagio Hotel, Las Vegas in early spring 2019.