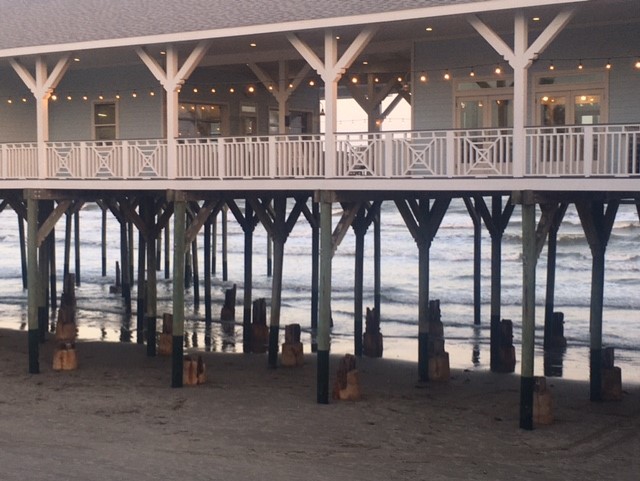 A setting is the sum of its history.  Whether you’re writing contemporary fiction, or something set in an invented country, a place’s history provides both context for your story and opportunities to make your story specific.

I played into that with the mystery I just released by setting it in Galveston, where I am familiar with the history, because I grew up just a ferry ride away.  Galveston Island has been shaped by its relationship to the Gulf coast’s tempestuous weather.  That allowed me to talk about things specific to the island, such as the tree sculptures created after numerous old oaks were drowned by hurricane floodwaters, and also to add complication to the plot by introducing the threat of yet another hurricane.

In any setting, there are going to be old buildings that are leftovers from a previous time.  I’m working on a manuscript that deals with time travel, so I’ve been thinking a lot about how different a city in the past looks from a city in the present.  The city in question for the project: Paris.  One thing that I didn’t realize when I started working out my draft is that during the impressionist era, there was a city wall around Paris.  This led to questions I hadn’t even thought to ask: would my characters be able to pass through easily when the wall was in working order?  Would they be able to visit ruins of the wall when they returned to the present time?  If one of the characters in the past left something for one of the characters in the future, where could it logically be?

Some places really embrace history.  A number of years ago, we road-tripped to Charleston to stay with friends of friends and explore the local tea plantation.  One of the things we learned about the area is that you have to have a permit to repaint your house.  And there’s a different permit if you want to paint your house a different – still historically accurate — color.  There’s a whole tangle of potential conflicts tied up in those kind of details.  Not the least of which is that if you’re dealing with a real place, you need to get the details right in order to keep readers happy.  People who travel extensively, or who live in the places you’re writing about, will know if the houses are the wrong color, or if a certain building wasn’t there in the year you’re writing about, or if your character is going the wrong way down a one-way street.  And they won’t just know: they’ll care.

And the names of some places encapsulate history.  One chocolatier I know purchased a house in small-town Texas to use as a shop and found out everyone kept referring to it as, “The Old Wiseman House.”  He decided to embrace this, and named his shop Wiseman House Chocolates.  Characters in books sometimes do the same – but other times they work to make spaces that historically belonged to someone else their own, such as when Agatha Raisin changes the sign on her cottage.

Your characters’ knowledge of the history that comes into play where they live can also give them a context for figuring out clues or sharing information.  One example of this would be in the film National Treasure, where the characters keep using history as a code, or almost an in-group language.  (They know that the clue on the map for “Heere at the Wall,” refers to Wall Street, where there was once an actual wall.)   And using a character who doesn’t know the shared history as a stand-in for the audience allows for the characters who know the history to share it in a way that makes sense.

Places form an important part of stories.  It really is true that if you could change the setting of your story without changing anything else about it, then you aren’t using setting to your full advantage.  In order to make any story universal, you have to focus on the specific.  Make the setting real.

To learn other ways you can use history in fiction, join us for Saturday Night Write on April 17, 2021.  For more details, visit the Facebook event.

(This picture is of the rebuilt Murdochs after the hurricane in 2008.  The old piers are visible among the new piers in the sand.)