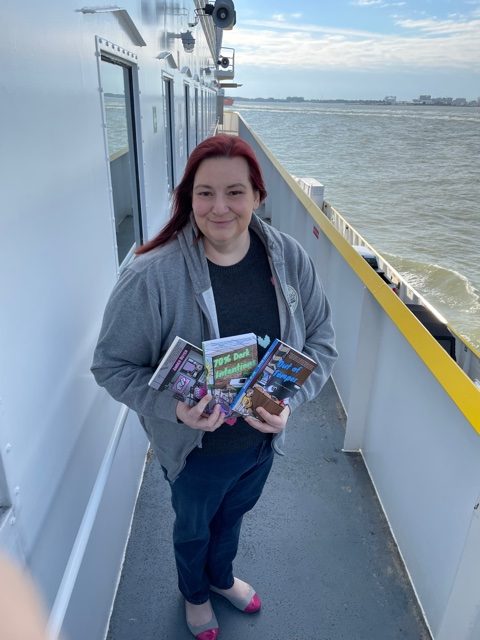 Here it is, release day for Out of Temper.  I usually do these posts the night before, but I had a class to teach last night and we are visiting family, so by the time I would have been able to get to it, I was just too tired.
Out of Temper really was a fun book to write.  Putting my Bean to Bar characters on a cruise ship reminded me of everything I love and have been missing about travel.  And doing all the marketing stuff running up to launch—making cruise playlists and lists of the best things about being on a ship—I couldn’t help myself.  Two weeks ago, we booked a cruise.  Which we got off of yesterday.  (Hence being too tired yesterday to write this post.  We found ourselves packing everything into the trip that we’ve been wanting to do over the last two years. Snorkeling. Salsa dancing. Riding the wave rider. People watching. All of it, in just five days.) There was so much relief to it, so much excitement. It made me feel like now I can go forth and get things done — after yesterday’s three hour nap.
So what did I learn from writing this one? I guess it has to be something about the plot of a novel working itself out. Out of Temper is the third book in the series, so I already knew my characters (though I did discover new things about them in the course of the story) and I was dealing with a familiar setting, and many familiar processes. What I couldn’t figure out is who actually committed the murder. I had the basics of what clues could be uncovered and the shape of the story on my outline — but I still hadn’t solidified the conclusion by the time the calendar said I should start drafting. I found myself writing Act 1 and part of Act 2, and then hitting a wall, because I hadn’t figured out who done it. And the character I thought should be the one to have done it when I had to pick so I could start writing turned out to be the wrong character. But the way the foreshadowing was set up, the true culprit also made sense, so there was minimal re-writing once I had the big epiphany. I just needed to trust my process, that what seemed like an insurmountable obstacle would somehow work itself out.
I think I need to apply that more to life in general. Sure, I might be wrong, but I need to stop borrowing tomorrow’s anxieties. I might crash and burn–with a book or with something else–but not trying just means guaranteed failure. And so far, readers are really liking the Bean to Bar series. I’m working to find a bigger audience, but the one I’ve already found seems to be connecting with the books. (Thank you! You know who you are!) 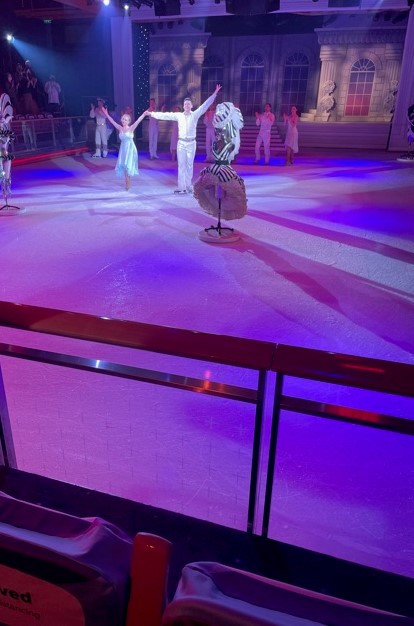 A few days ago, we were at the shipboard ice skating show, and a number of the skaters fell. One girl really crashed. But she bounced back up and kept skating like she was really enjoying it, and the difficulty of what she was doing made all the jumps and spins she landed that much more awesome … and from the look on her face, you could tell she knew it. One of the guys did a perfect back flip, then skated up to the railing and gave us all a wink and a thumbs up in response to our applause. They were showing off their skill for an appreciative audience–on a rocking boat–and keeping to the routine and the story while at the time being themselves. There’s something about it that made the show that much more enjoyable. I’m not sure exactly where the metaphor is in that–but it’s there somewhere. And I’ve been thinking about it for days.
I’m starting to find the joy in writing again, after a period where I felt like I was pushing through stagnant waters. I’ve been reading the Steal Like an Artist books (the one I got the most out of was the third one, titled simply Keep Going) and that has been re-invigorating as well. It all makes sense, when you realize that the Bean to Bar books are all about re-invention, and in Out of Temper, Felicity is really starting to move forward in life. I hope you enjoy reading them as much as I have enjoyed writing them!