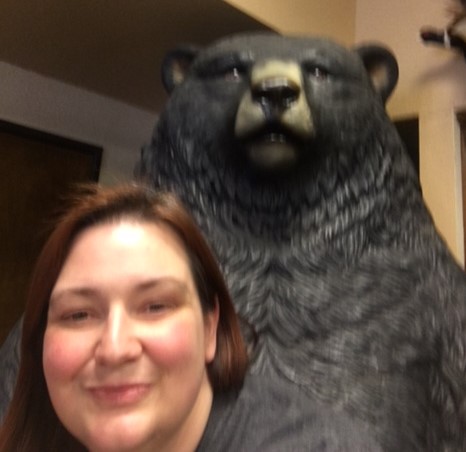 I know they said not to take selfies with bears . . .

One of the hardest things about humor writing is giving your reader permission to laugh.  After all, you’re putting your protagonist in embarrassing, and sometimes physically painful, situations.  The last think your audience is going to want is to feel mean for laughing.  So how do you keep them from feeling like a bully?

Perhaps surprisingly, this is related to the door to adventure in the Hero’s Journey.  I talk a lot in my writing classes about how you can’t push a character through that door.  They have to make a specific decision to enter the story as protagonist, and they need to be given a legitimate choice to back out.  Here’s the thing: psychologically, once your character has stepped through the door, the reader is going to feel that the character has made himself fair game for the plot.  Whatever happens after that, on some level he deserves it.

But that only goes so far.  At some point, the reader can decide that you aren’t respecting the character.  If you want the reader to laugh without guilt, it’s important that you never make the character the butt of the jokes.  It’s the situation, the juxtaposition of elements, or the character’s inability to handle the situation that gets the more honorable laugh.

— When we feel like the character is able to laugh at themselves.  If she’s telling us that in first-person narration, it’s easy.  Even in third person, though, don’t be afraid to get into the character’s thoughts to give the reader the needed information.

— When we feel like we’ve basically become the character.  Often, heroes become stand-ins for the audience.  Once we relate to the character, and can see ourselves in him, we can laugh because we can empathize with his absurd situation.

— When the character has brought the situation on themselves.  We can laugh at characters like Lucy in I Love Lucy because she has invariably caused the situation she’s caught in – and she ignores sound advice that would help and only keeps making it worse.

— When the character thinks he is in control of the situation, but actually isn’t.  Sometimes there are elements she thinks she understands, but they’re in the wrong place (half of Emma).  Sometimes he’s in over his head, and just trying to keep up (all the mix-ups in Blame it on the Bellboy).  And sometimes she’s just been outplayed by other characters.

— When the character is bantering back.  There’s a difference between banter (wherein both parties are trading barbs equally) and a single character picking on another.

Want to pick up a whole book where you have permission to laugh?  I’ll be signing copies of my comic space opera Free Chocolate on Saturday, July 7, at the Barnes and Noble at Preston and Royal in Dallas from 2-4 PM.  I hope you stop by!

NOTE: That pic is of a bear sculpture in New Mexico at the Information Center on the road on the way to the Carlsbad Caverns.