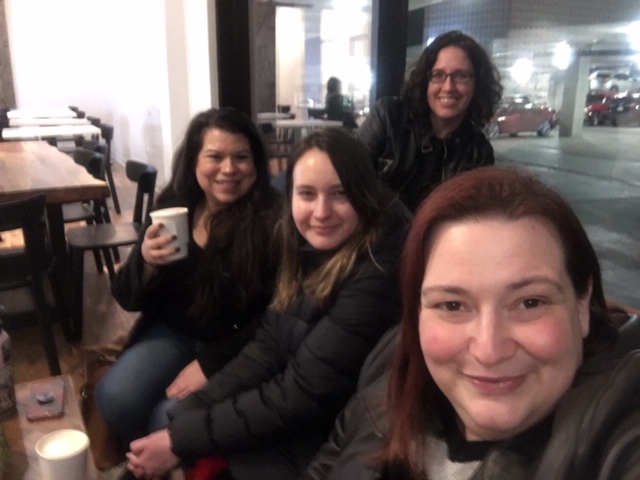 My Friends Interview Me

I have three very good friends who aren’t writers, but have been there with me as I developed the Chocoverse. I asked them what they would like to know, that hadn’t come up in our everyday conversation. It turned into this interview. The pic is of all of us hanging out at a coffee shop, back when it was safe to do so. I miss that, so much.

Here’s what they wanted to know:

If you weren’t a writer, what would you be?

I would run a bed and breakfast in Hawaii, where I had someone to make the beds and I just had to come up with breakfast and fun treats for teatime. And then I could hear stories of people traveling from all over the world and get in shape by surfing.

What advice would you give to kids aspiring to be a writer?

Observe the world around you. Get a notebook and write those observations down. Snatches of dialogue. The color of a butterfly’s wing. How mad you got at your brother. It can all wind up in stories later.

Did you have the arc of the Chocoverse plotted from Book 1? (they may have picked up some writing lingo from hanging out with me)

Not exactly. I wrote Free Chocolate as a stand alone. But then I got to the end of it and realized, yeah, this is too simple. She may have put a crack in the problems facing her galaxy, but there’s a lot more to be set right.

I came up with an outline for Bo’s arc after that, and once I had an editor to work with, he challenged me to figured out how all the galaxy-wide secrets lined up, so I had a pretty complete outline for how to get through books 2 and 3. But sometimes things change along the way. For instance, I planned to kill off a character midway through Book 2. I got talked out of that and well — Ball lives, so everything changes. Brill has to deal with a half-Krom/half-Evevron, like the guy who killed his best friend, as a potential ally. And Chestla winds up in the middle of a love triangle I hadn’t anticipated – and couldn’t figure out logically which guy she’d choose. I wrote it all the way up to the scene where she makes the decision with no idea what was going to happen.

How do you plot a series?

It depends. If the series is episodic, the characters are the same people at the end as they are at the beginning, so the plot arcs are relatively self-contained.

But if there’s an overarching plot and a plot for each book, the graph of it looks a bit like a flower. You have a central arc the character has to deal with (for Bo, that’s basically stop the alien invasion and save Earth), and then each book is like a petal surrounding that center, with its own arc and climax, which plays into the larger arc (so for Book 1, it’s break the monopoly on chocolate and live to fight another day). You have to make sure you leave the character enough to do in the subsequent books.

What do you do when the story takes a left turn when you expected it to go right?

I follow it. Sometimes when you get into the story, and really get to know the characters, they do things that surprise you. In Pure Chocolate, I had no idea that Bo would decide to challenge a Zantite to a duel.

But it was the only logical way for her to save Brill, by forcing the rogue cop intent on executing him to step back and wait. Though she knew she might have to go through with it if she couldn’t solve the underlying problem, she didn’t expect to win the duel. She was just playing for time. But it was a hecka better solution than whatever was in my original outline. I can’t even remember at this point what that was.

How do you develop characters’ personalities and likes/dislikes?

I get to know all the characters by writing a bit, and then if I can’t understand someone’s behavior, or can’t figure out what he wants out of the story or out of life, I sit him down in a white room and do first-person Q and A. It’s really my brain being forced to get into someone else’s mindset, to try to see through his eyes, understand how his thought processes work. Writing is about sustained empathy. You have to be able to do that for each character – even your villains.

Preferences, likes and dislikes all flow out of who the character is. For people I’ve been writing a long time, I can imagine what they’d do/choose in most situations. One character interview I looked asked what kind of socks your character is wearing right now (Socks? Bo’s wearing dress shoes. Unless she’s sneaking around – then it’s comfy black socks under boots). And yeah, I know the silly stuff, like what all my characters would choose if they walked together into an ice-cream shop. HINT: None of them would pick chocolate.

What makes a villain villainous?

Seriously, though? A villain has intent to harm. Otherwise, she’s just an antagonist. We all have wants that are in conflict with someone else’s: to win the same award, marry the same guy, have our yard not have dog poop in it. We may take action towards our goals. In that sense WE could be other peoples’ antagonists. But if we aren’t trying to hurt them to get what we want, we’re not villains.

Who is your favorite “bad guy” in the Chocoverse?

Crosskiss. He’s methodical and has a plan. There’s a lot about him that seems downright monstrous – I mean, Bo watches him execute one of his own crew members to escape a lockdown order – but there are solid motivations behind what he does, and a logic that makes a skewed sort of sense. And as dark and callous as he can be, he doesn’t hold grudges after a conflict is over. Which means that, even though Bo survives his plan in Book 1, he’s not looking for revenge in Book 3.

How did you come up with aliens who eat stowaways?

I based some of the Zantite’s behavior on sharks. Who will eat just about anything – including each other. And yet – the Zantites have codes of conduct. They’re monsters, yes – but they’re civilized. They will eat stowaways, criminals and insubordinates, but not just random people. And part of what Bo realizes in the course of Book 1 is that sometimes, the humans are the real monsters.

How do you balance humor and drama?

That’s a hard question, because a lot of time, I don’t think, wow this scene needs some funny in it. I just add it, almost instinctively. It’s easier to tell when it is out of balance.

Humor is about breaking up tension. You have to be strategic about where you put the jokes. Sometimes, physical comedy in an action scene is fine – but not if you want the audience to feel fear or despair. Sometimes, your romantic leads can have a funny moment leading up to a kiss – but only if that’s who they are as people. Just – the characters themselves should never be the joke. They deserve dignity, even if the problems they are facing are absurd.

How do you choose what to write?

I write the stories that keep coming back into my head. The ones take keep me up at night, with characters demanding to tell their lives and their troubles. A lot of times, my ideas come out of conversations I’ve had with friends, and I usually have a particular friend in mind as my ideal reader for a particular piece, and it’s a different person each time. As a writer, you’re going to have more ideas than you could follow up on in a lifetime, so you can’t waste time with anything you’re not truly passionate about.