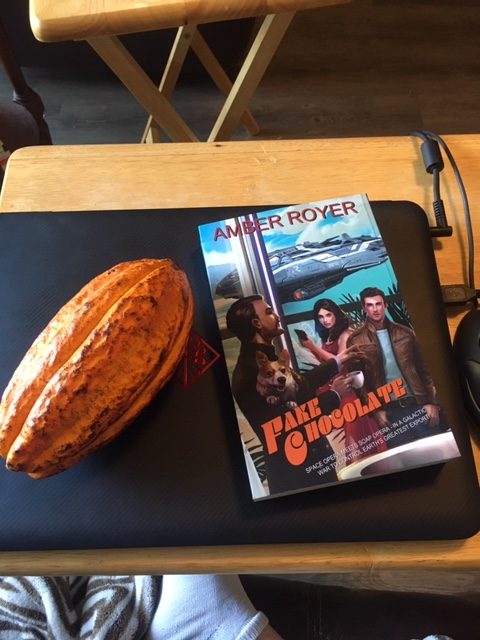 Lessons Learned From Writing the Chocoverse

Here it is, the night before the final book in my trilogy comes out.  Very little about this is the way I imagined it would be.  I never intended to become a hybrid author.  I never intended to launch a book in the middle of a pandemic.  And I still feel like a tiny voice shouting into the darkness, after starting out with tons of positive critical reviews, but only finding a readership where my book keeps being called, “an undiscovered gem.”  But.  All of this has taught me some important lessons about the value of finishing what you start – whether anyone else recognizes it or not.  Whether or not the end result looks anything like what you originally wanted.  Because adversity might just push you to create something better.

Part of the reason I wrote the third book was because I personally needed a sense of closure.  If I had given up on Bo without completing Fake Chocolate, I would have missed really understanding her character arc, and all that had to teach me.  (I knew Bo was dealing with some of the same issues that I’ve dealt with in my own life – and her insights at the end were blindingly vivid.)  And she and Brill wouldn’t have gotten the ending they deserved.  I would never have gotten to see Chestla finally find love, or even have been able to understand what love means to her.  I would have left Frank half-transformed in the middle of a huge arc.  I know it is weird to be concerned about the uncompleted fates of fictional characters, but these characters have been with me for years.  I know them inside and out. I have put them through agonizing events – killed people they cared about, injured them physically, given them broken, painful backstories.  They have earned the measure of happiness they get at the end of this trilogy.

Ad when I look back over the trilogy, I think Fake Chocolate is the strongest book of the three, from an emotional standpoint.  Probably because I’ve had to become a stronger person since the first book came out.  I consider my books to be fairly innocuous.  But people have found plenty to hate on about them on the Internet.  I finally came to the conclusion that their comments had very little to do with the book I actually wrote, and more with it not being the book they wanted someone to write.  Or with me not being the person they felt should be writing my characters.  And you know what?  Accepting that fact, knowing that I’ve actually written three very good books, and that my series has connected deeply with the readers I have found, has been quite freeing.  Which makes my own character arc run pretty much parallel to Bo’s.

I’ve written a number of short stories set in the Chocoverse over the past month, while I’ve been dealing with the craziness of being stuck at home, watching my schedule for the year collapse, feeling fearful for the people I care about, several of whom work in hospitals, many of whom are older folks.  I have to say, these are the characters I come back to when times in my life are hard.  For all of its dangers and wackiness (in one of the short stories, Bo has a run in with a lizard-eating alien orchid) the Chocoverse is a place where I feel at home.  I can invent new characters on the fly, because I have a sense of their planetary cultures.  There’s tons of inventions and superpowers that are cannon from the books, or from the earlier stories that are fun to apply in unexpected ways.  So I’m not completely done with this ‘verse, not yet.

I still have a lot of irons in the fire before I commit to any longer pieces in the this ‘verse.  I am looking forward to finishing the workbook for writers that I’ve been compiling.  I’m referencing my novels a bit for examples, but the whole thing is based on my decade plus of teaching creative writing, and the issues I’ve found that students often have.  And many of you know I have been dabbling with mystery novels and time travel stories.

But you want to know the most important thing writing the Chocoverse has taught me?  That true friends will be there for you, no matter what.  This happens in the books, time and again, and as Bo’s journey progresses, she realizes she has more friends that she thought.  But it has happened in my life too, with every step backwards these books have taken.  We did an IndiGoGo for Fake Chocolate (which was hard for me, since I don’t like talking about money, let alone asking for it) because a writer whose group I have lectured at convinced me to, and the effort paid for my cover art (which is PERFECT, by the way.

My friends have showed up three times to portray characters from the books for my book trailers – once in the freezing cold and drizzling rain – and this time juggling conflicting schedules for the only possible day for filming, which turned out to be right before the cancellations and closures started.  Filming day was the last time I saw everyone in person.  (I really miss you guys!!!!  Zoom just isn’t the same,)

And you know what else?  When my in-person launch party got cancelled, everyone involved was willing to help turn it into a digital event.  And my pastry chef friend who did the cakes for my first two parties is currently on her way over to doorstep-deliver cupcakes so we can show them on camera.  It’s not what I imagined at all.  But somehow it means so much more.

I just want to thank everyone who’s been there along the way.  And I hope you’ll come with me wherever the next project leads.

One Response to Lessons Learned From Writing the Chocoverse