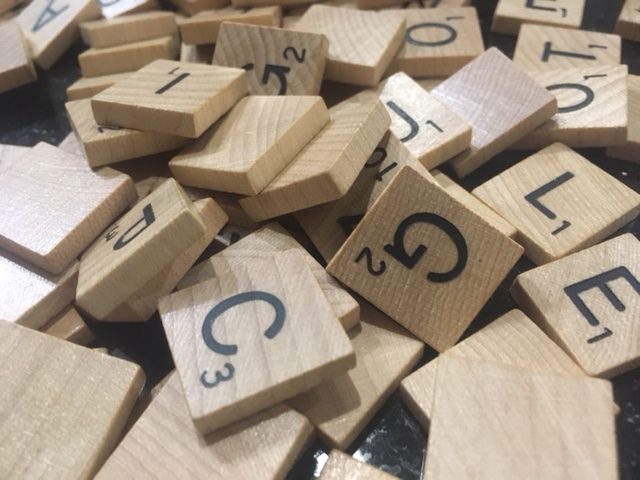 I’ve designed parts of multiple alien languages for my Chocoverse books.  It’s one of the most fun parts of worldbuilding.  I love building lexicons and language rules, and thinking about how prefixes and suffixes can affect a basic word’s meaning.

Depending on how much of the language will actually be used in a book or story, I may not work up an entire linguistic pattern.  I just need to make sure it is going to sound logical if I use the same language again in a different piece.  So while I might just be writing a couple of sentences, I still break down the meaning of each invented word, and I note the word order.

Just by being consistent on those two simple things, you will be a long way towards having your little snippets of invented language feel real.

Some languages are arranged:

There are of course other variations on this.  In my Chocoverse, I have a thought-cloud language, where the word order is basically by order of emotional intensity, regardless of part of speech.  “I eat strawberries” transliterated from the Myska language would get you something like:

These word clouds can be exhausting to the reader, so I have these characters able to learn other languages, including Universal, a handy language I can just write out in English when all the characters involved understand each other.  I’ve never written a lexicon for what it would sound like if I actually wrote things out in Universal, but I have noted that it was derived from Krom, so long ago that the two languages have diverged completely.  This is similar to the way English is considered a Germanic language (our grammatical structure comes from proto-German), but we have just as many words on loan from Latin-based languages, and an increasing number from around the rest of the globe.

I love playing with misunderstanding and the complexities of thought and meaning.  Imagine if you put together a character used to a Subject Verb Object language with a character who speaks an Object Verb Subject language.  An innocent phrase such as  Object: Bread — Verb: Cut — Subject: You   could be construed with any number of ominous meanings.

When working with invented language, it can help to mimic the “music” of a real language.  Watch some television in whatever language (or languages) you are using as a model, paying as much attention to the rhythm when it is spoken as to the meaning of the words.  Overall, are the words long or short?  Are the words long, unless the speaker is upset?  Or short, unless in a formal situation?  Is the language tonal?  Are there glottal stops (which would be rendered as apostrophes in the text)?

— Some languages sound guttural and harsh.  The language I gave the Zantites takes this to an extreme – they are shark aliens after all — and is described by one of my characters as sounding like, “gargling rocks.”  They have lots of doubled k sounds in the middle of words (jakkag – meaning to crochet) and doubled g sounds (kuggek – a stringed Zantite instrument).  There are also a lot of one syllable words that beg to be said quickly (qwep – lockdown, breck – large Zantite food bird).

— Other languages sound more lilting.  I wanted the Krom language to feel like that, and to seem a bit slower, reflecting the longer lifespan and philosophy of enjoying life. You get long words with a lot of l sounds (tanyaliesh – thank you, iololla — natural Krom antifreeze) and o’s (Naramoosh! — Quickly! Hurry!).  While Krom are usually formal with names, they tend to shorten other words depending on the formality of the situation (tanyaliesh becomes tanvell to acquaintances and tanv to friends) and my characters who are traders tend to be less formal overall (Brill often refers to people as su, which is basically like saying dude, instead of the more formal suwal).

Language is often a regional thing, so it is possible for some characters to speak a dialect that other characters may only half recognize.  And word choice may vary depending on the age of the speaker, whether this person is from an urban or a rural area and the speaker’s social class – as well as the person your character is speaking to.  Imagine how these differences work with people in your native tongue, and apply these thoughts to words as you are designing a language.

More than anything, though, make sure the language is pronounceable, especially if it will be used in complete sentences or paragraphs in the text.  You want readers to enjoy their experience with your invented language, after all.

If you would like to learn more about Invented Languages, join us on Zoom for this month’s Saturday Night Write session on Saturday, November 18, 2020.  More information is on the Facebook Event.  Free and open to all.