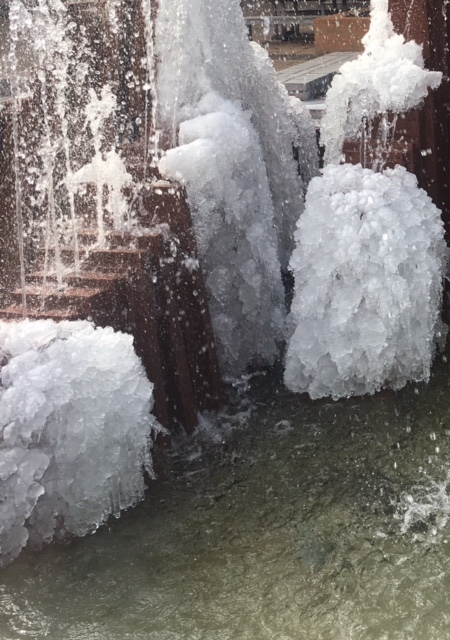 One thing I see students doing repeatedly is over-worldbuilding.  They get the idea that to make their worlds absolutely real, we need to know every scrap of backstory, and to have detailed schematics on every piece of technology.  The problem: this slows the pace and takes the focus away from the story.  So I routinely introduce the idea of Hemmingway’s Iceberg at the start of every Beginner Fiction class.

The concept is simple: Imagine that you’re on the front deck of a cruise ship, and you see an iceberg coming at you as fog clears.  The captain seems unaware that anything is about to happen – has in fact just announced an opportunity to meet him in the lounge for champagne and cake.  You feel something cold on your face, and when you look down, you see a chunk of ice on the deck between your feet, flecked with blood from where it has just scraped your face.

Do you need to see the part of the iceberg that’s underwater to know that it is about to rend open the hull of your ship – or that it just has done?  Do you need a science lesson on how glaciers form, and what factors are important in causing them to break off from glaciers to accept the situation?  Or even a history lesson on what happened to the victims of the Titanic so that you can have a proper fear of your flesh freezing through?

Hemmingway said that only about 20% of an iceberg is above the surface – but that it wouldn’t have the sense of grandeur if it wasn’t for the 80% going on underneath.  When applied it to writing, you should understand the world you’ve created 100% — its logic, its history, its culture.  But only about 20% of what you have created needs to wind up in your story.

One of Hemingway’s biographers wrote, “in the writing style of the iceberg theory the hard facts float above water, while the supporting structure, complete with symbolism, operates out-of-sight.”  In other words, we get what you’re trying to say, without you having to tell us outright.  And we feel smarter as readers for having figured it out on our own.  Which makes us more invested in the story, and gives us a more urgent need to read on and find out if we are right.

You – your character – your reader — is never even going to think about what is going on underneath the water as the deck of the ship tilts and their stomach lurches and more shards of ice shower down on their heads.  But it will color the way you write the rest of the scene — the way your character thinks and interacts with the world – and how expansive the reader feels your world is.

So how do you choose which 20% to present?  The pieces of worldbuilding you include should relate to the characters’ current situation.  If you want to talk about the ecosystem, send them walking through the woods and have the cool bear-lion-snake alien you created try to eat them.  Then, the shaky-but-still-alive protagonist has earned a few lines about how this used to be a peaceful forest, before the invasion of the Blahbleckythings.

In his screenwriting books, Blake Snyder calls the part of the story where most worldbuilding appears as, “Fun and games.”  I’ve heard romance writers refer to this same thing as the “getting to know you” part of the book, or the “relationship building” part.  It may help to think about it like that – you want to establish your character’s relationship to the world, not the existence of the world itself.  If it is real to the character, it will feel real to the reader.   If the character falls in love with it, so will the reader.  If the character’s afraid of it . . . well, you get the idea.