31
May 2019
dandylyon85
No Comments
Uncategorized
Permalink 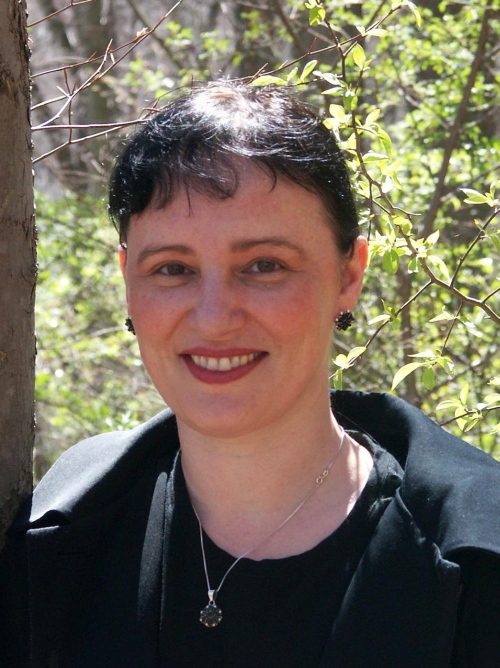 I got a change to talk with fellow Angry Robot author Anna Kashina about (among other things) balancing point of view when working with a large cast of characters.  She also touched on how to introduce characters and make sure they have distinctive voices.

How do you balance multiple POVs so that everyone gets the right amount of “screen” time?

There are several ways to do this that I found effective for me. First – and it tends to work well with just two characters – it a straight alternation of chapters, so that you constantly toggle between the two points of view. I did this in my earlier novel, MISTRESS OF THE SOLSTICE. I tried to do it again in BLADES OF THE OLD EMPIRE, but then all the other POV characters started creeping in, and it just became impossible.

To make each POV memorable and distinct, it is essential for each character to have a unique voice. And this, in turn, loops back to the character development, discussed below. Once the characters are real in my head, giving each of them a unique voice seems like no effort, really. I don’t even think of it. All I think about is, do I want this scene to be told, e.g., from the point of view of an impressionable youngster, or an old cynic? And that choice drives the writing and the choice of which POV will be used in the scene.

In my most recent novel, SHADOWBLADE, I narrowed the POVs down to three, each of them a favorite. The main character, Naia, is a strong-willed young girl who tends to get in trouble for standing up for her beliefs. Karrim, her close superior in the Jaihar Order, is sassy and flawed, but also powerful and independent and very good at what he does. And Gassan, the head of the highly influential Daljeer Circle and the instigator of the entire political plot that drives the story in the book, is middle-aged, cynical, and very level-headed. Playing out my story off their POVs made it so much fun.

How do you introduce a large cast of characters so that no one gets lost and the reader isn’t paging back thinking, “Who was that again?”

My essential first step is to think my characters through to the point when they become real in my head. It usually starts with appearance, which serves as an anchor for all the other features. I can’t even start writing the story until I have all these details fully form in my head. At that point I start thinking of my characters as the people I know. I have to be certain about their reactions in each situation, about their preferences, tastes, and beliefs. Once this is done, when I start writing I literally feel as if they are acting on their own and all I need to do is write down what they say and do.

I heard some writers keep a list of the major features of their characters, such as eye and hair color, clothes, etc. In my case, I put so much detail into creating my characters that I never have to do this at all. They are absolutely real for me, and once I achieve this state of mind, there is no conscious effort I spend to relay this in the text.

How do you create multicultural environments that are both respectful and engaging? How does having traveled and lived in other countries affected how you write?

I always base the environments I create on the actual places I visited, working off my strongest impressions – smells, sights, food, unusual objects. Another important thing is always to remember the five senses when creating each scene. And yes, my traveling experience does help a lot. I have visited some very exotic places in my life, so I have a lot to pick from.

When I write about a new place, I try to think both as a local and as a visitor. I believe it is a good trick to be respectful and engaging at the same time.

How does your day job as a scientist dovetail with how you approach writing fiction?

Being a scientist taught me to always be logical, to get my facts right, and never to leave any loose ends. I found all these qualities critical in novel-writing.

What five things should writers of all genres keep in mind when they approach worldbuilding?

Oh, this is such a big topic all in itself!

I think one important thing to remember is that worldbuilding is primarily needed to create an immersive experience for the readers, which means that it has to be absolutely realistic and consistent from the characters’ point of view. There is no end to good worldbuilding. Mine starts long before I begin the work on the bulk of the book, and doesn’t end until the book is complete.

But I think an even important thing to remember, one that is also much harder to get exactly right, is the fact that the readers don’t have to know everything the author knows about the world. After spending long months on very intricate aspects of the geography, history, lore, and culture, it is just too tempting to incorporate it all into the book. In reality, though, you need maybe one tenth or less to effectively portray the world. The rest needs to stay hidden, not to overwhelm the reader. These choices tend to be really tough.

Anna Kashina writes historical adventure fantasy, featuring exotic settings, martial arts, assassins, and elements of romance. Her “Majat Code” series, published by Angry Robot Books, UK, received two Prism Awards in 2015. She is a Russian by origin, and a scientist in her day job, and she freely draws on these backgrounds in her writing. Her newest novel, SHADOWBLADE, is upcoming from Angry Robot Books on May 7, 2019.

You can learn more about Anna at her blog: 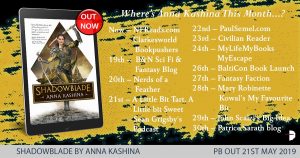