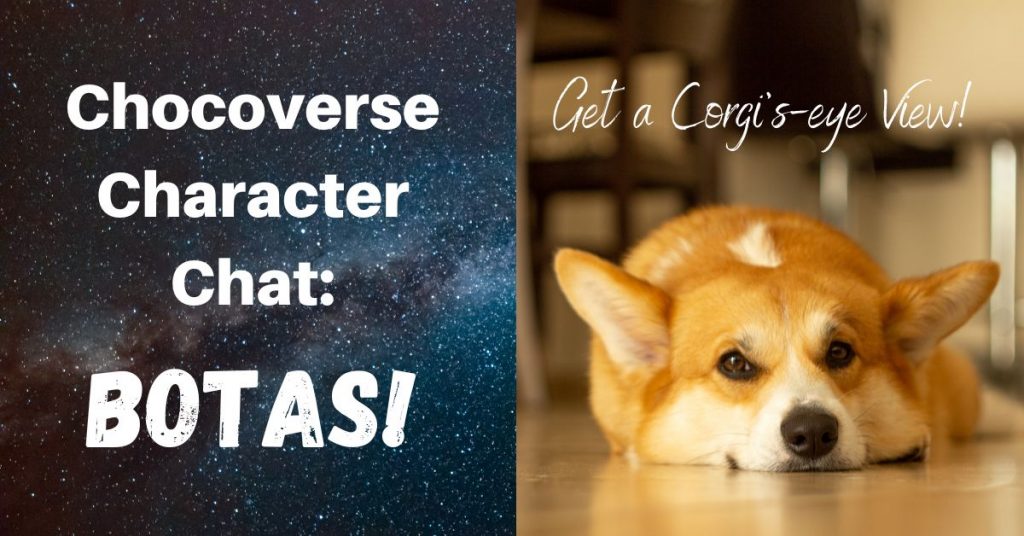 Hola!!!  I’m Botas, the corgi from the Chocoverse.  Today I wanted to talk about second chances.  I believe everyone should have one – especially dogs.  Due to circumstances beyond my owners’ control, I wound up surrendered to a shelter – twice.  And each time was the start of a new life.  Not that I’ve forgotten the people who loved me.  I still think about them sometimes, and I wonder why humans live lives that are so complicated – and so filled with sorrow.

I kind of feel that way about aliens too – now that I’ve met one.  My new owner Frank is friends with a guy from outer space.  I like him!  Brill is the kind of guy who takes time to give a doggo extra pats, and to throw the ball with him.  Because of his space-alien special abilities, he can throw the ball really fast.  Like – you can hardly see him do it.   And the ball goes bounding off again.  And he never seems to get tired of doing that.

There’s some kind of conflict between Frank and Brill.  I wish there wasn’t, because then I would get to see Brill more.  If only Brill could see what a kind person Frank is.  When I was at the shelter, everybody would just be kind of sad around me.  And it was like nobody wanted to get too close, lest the scent of sad rub off on them – even though I had nothing to do with anything that had happened.  But Frank – he walked in with a little dog-safe teddy bear, and he gave me a big hug.  I knew I was going to be safe in his gentle hands.

I know Frank has had to commit violence – but he’s like an alpha dog, ready to do whatever it takes to protect his pack.  And that makes me feel comforted.  It’s the only time in my life I’ve every had someone capable of standing up for me, no matter what.  I don’t know what I would do if anything happened to him.  I’m not sure I could handle winding up back in the shelter – again.

That’s why this untrust-thing between Frank and Brill bothers me so much.  I like both of them.  They’re both great guys!  Surely, they can give each other second chances too.    They’ve both made mistakes, and I’ve heard that Frank tried to kill Brill, at least once, even though they both care about the same human — Bo.  She is great too!  She knows how to scratch a dog at just that one itchy spot.  And she makes home-made dog treats!  Brill is in love with her, and Frank wants Bo to be happy because he’s dating her mom.  So they’re one step away from being family – though I don’t think they see it that way.

There are these two orange cats who live in the apartment down the hall from Frank and me.  They’re twin brothers.  And they’re just like the guys.  Sure, they’re always hissing and fighting between themselves.  But if you so much as bark at one of them, the other one is right there ready to scratch your nose off!  Not that I’m afraid of them.  Not much, at least.  After all, Frank is such a brave guy, I would hate to disappoint him by coming across as cowardly.

I don’t get what the humans are fighting about, anyway.  Everyone keeps talking about chocolate.  Which I’ve never had.  They say chocolate is poisonous to dogs.  But still – it smells kinda good?  Nothing like baked chicken – which is my favorite!  Or roasted chicken.  Which is my favorite too!  Or grilled chicken – I just like chicken, okay?  Not that I get it often.  Frank is not a big believer in giving me any food or treat not nutritionally designed for dogs.  Brill on the other hand – he realizes a little bite of chicken never hurts!

They way they keep taking about chocolate, it’s like the world’s going to explode.  And like Bo either caused the problem – or she’s the one who’s going to stop it.  But me?  I think everything is going to be okay.  Because Frank would never let anything happen to me.