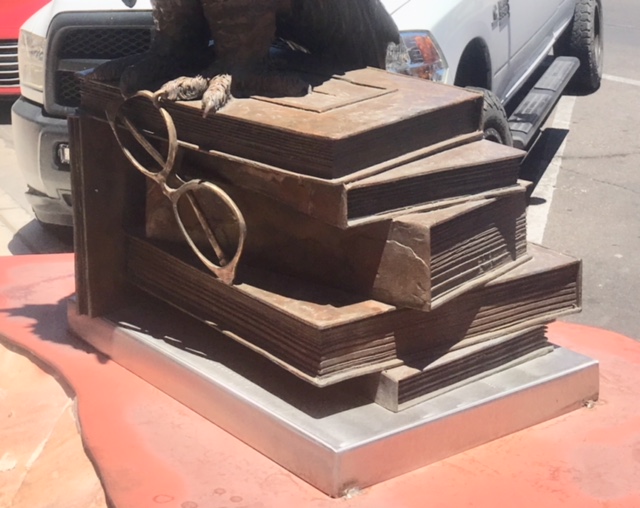 I’m doing a query clinic next month, and today I’m trying to turn my time in the query trenches, and all the lessons I learned the hard way, and those I learned from critiquing other people’s queries, into a concise, helpful Power Point.  Getting it right means a lot to me, because queries are make or break in this business, and I want to give everyone in the class their best shot at getting requests.  Let’s be honest.  Querying can be the most difficult, painful part of the whole writing-to-publishing process.  It’s a business letter, a job interview, a book blurb, a first date and a circus act all rolled into one.

I’m going to cover what to do in class, but here are a few surprisingly common “don’ts” that can help you understand the querying process.

Don’t talk about how much money your book idea can make the agent or editor.  That is not only a turn-off, but it wastes precious space better spent on making a good impression.  Think about everything a query letter has to do:  You are proving that you can listen to and follow directions, that you can be charming or funny or literary, that you’re someone who would be easy to work with, and that you understand both the meaning of your own work and its context in your genre – all in the on-screen equivalent of one sheet of paper.  Trust the agent or editor to understand the market too, and to decide whether the concept is profitable.

What you are trying to do here: Build a relationship.  Agents aren’t just looking for a single book (though a polished manuscript IS key).  They want someone who they can help to build a career, someone they can trust to follow up on the promises they make on your behalf to editors, who will show up on time for panels and signings.

Don’t send unasked for attachments or extra materials.  See the above about listening to and following directions.  It’s not that the industry professionals are trying to be arbitrary, they just have different ways they prefer to work.  And if they ask for three pages pasted into the end of an e-mail, and instead you send the entire manuscript as a Word Document – well, the first thing they’re going to imagine is what would happen if they sent you an edit letter asking you to clarify the relationship between two characters, and how you would probably send back a plot-irrelevant subplot about those two characters taking a three-chapter mid-book vacation to the Grand Canyon.

What you are trying to do here: Sample pages are meant to intrigue the agent, the same way a reader might open your book in a bookstore and read for a few minutes before deciding whether or not to take the book home.  You can’t tell that reader, “Oh wait, it doesn’t get really good until chapter 5.”  Don’t expect the agent or editor trying to woo that reader to be looking for anything less than an opening that – whether it’s lyrical heartbreak or sky-high explosions – doesn’t pull them in in the space of the sample pages.

Don’t be gimmicky or clever.  Unless you want the agent or editor to think your book is a gimmick.  They are going to read what’s on the page, not what’s in your book, and assume that there’s no subtleness or depth underneath the tricks and pandering.  Besides, true cleverness is really hard to pull off.  More often, you come off sounding condescending, or accidentally reveal that you don’t know quite as much about the history of your genre as you think you do, when your mind-blowing twist turns out to be a common trope.  Other forms of cleverness – such as having your protagonist “write” the query letter for themselves — are so overused that they have become automatic “groaners” when yet another query containing them crosses the agent or editor’s desk.

What you are trying to do here:  Match the tone of your book in the query.  If you are trying to sell a comedy, your letter needs to be authentically funny.  If the book’s all gothic and atmospheric, focus your word choice during the part where you are describing the plot so that you offer a glimpse into what that world will “feel” like to be in.  If you’re writing lyrical literary fiction, don’t be afraid to be lyrical when you describe your character.  Sell the industry professional on your writing voice in a way that’s subtle and makes everything in your submission package feel “of a piece.”

Don’t query an incomplete manuscript.  It can be tempting, especially because it often takes so long to hear back once you have sent a query.  But what if it doesn’t take long?  What if that agent decides to spend next weekend emptying out their in box, and the following Monday they send you a request for the completed manuscript?  Sure, sometimes they will wait for you to get it finished, and sometimes they’re still interested by the time you have it ready to send, but that’s more the exception than the rule.  You only get once chance to make a first impression, and generally, you only get to query an agent once with a particular manuscript.  Why not wait until you are sure you can make the best impression possible?

What you’re trying to do here:  Because you can only query once per manuscript (and yes, industry professionals will remember if they’ve seen a project before, even if you’ve made edits or changed the name), you want to send a query and sample materials that have been polished to the best of your ability.  If you haven’t completed the manuscript, it’s hard to know if the “work in progress” chapter one will even be the “final” chapter one for the book.  If you do completely re-structure a manuscript, re-title it before sending it out again, and be honest with agents you’ve sent the original version to.  Tell them it’s a complete re-do, or a new project loosely related to the original book.

Don’t make everything about you.  Industry professionals are people, first and foremost, and they get a TON of queries.  A lot of times, they get queries for genres they don’t represent, letters that get their names wrong, scatter-shot e-mails that ‘CC just about everyone in the business.  Sorting through an in-box full of those has to be like being at a cocktail party with an endless stream of people who only want to talk about themselves.  Remember the above, about how agents and editors are looking for someone they can build a professional relationship with?  If you want to stand out in a good way, show that you care about that particular literary agency or publishing house, or that you’ve taken the time to find out about that agent or editor’s personal literary taste.  They have web sites, post interviews, and maintain Twitter feeds for just this reason.

What you are trying to do here:  Be professional, not stalkery or overly familiar.  It’s great to say you’ve read through an editor’s Manuscript Wish List, or that you enjoyed a point from an agent’s Twitter thread.  Not so much to say ANYTHING about an industry professional’s looks, or hometown.  You also don’t want to sound like you’re sucking up, and you definitely don’t want to lie.  If you haven’t read any of a particular agent’s client’s work, and you say something like, “I loved Author X’s last book, so I thought I’d query you because I also have a clown robot detective protagonist,” you’re inviting yourself into a conversation that will likely include, “So how is your book different from Author X’s?”

Don’t Give Up.  This is the most important point in this entire post.  I know it sounds like trite advice, but one person’s opinion really is just that – one person’s opinion.  Art is so subjective.  You can Google novel rejection letters if you want to see just how many famous novels received multiple rejections before going on to becoming cultural icons or audience favorites.  Tastes change.  Trends change.  Revisions make your writing better.  There are so many variables.  The only sure way to make sure your book will never see the light above a bookstore shelf is to stop showing it to people.

What you are trying to do here:  Agents need clients.  Editors need manuscripts.  They’re all in this business because they WANT to find something that surprises them, moves them, amazes them.  Hard truth: that may not be your current manuscript.  (Maybe it is.  You won’t know if there’s a person out there who is a perfect match for your book unless you keep asking.)  But even if it’s not, if you remain positive and professional, the industry professional will remember you when it comes time to send them your next manuscript.  And they will realize you aren’t just a person who happened to write a book, you are a serious writer who is working to get better at the craft.

Note: Pic is a detail from the “Monumental Professor,” part of Boulder City, Nevada’s Public Artscape.