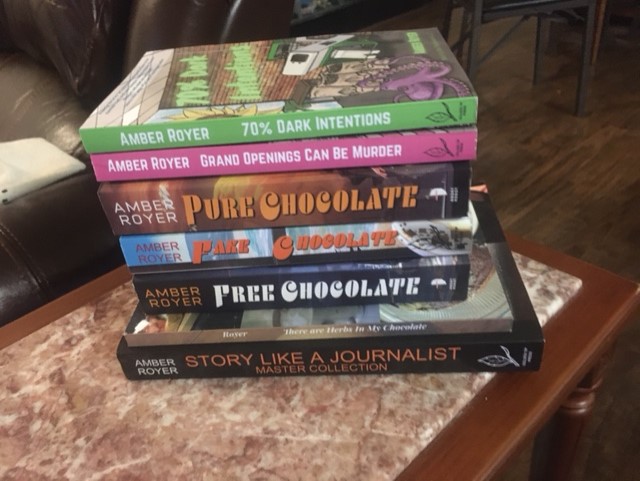 Here it is, very late the night before 70% Dark Intentions comes out.  I’ve just finished editing some video for the launch party tomorrow, and I’m finally getting to my book-launch eve blog post.

What did I learn this time around?  For one thing, how warm and supportive people can be, when you are approaching them for research, or just spontaneously because they like the book – despite being under unprecedented levels of stress.  In some of the reviews, people are talking fondly about how they picked up this book because of the way they felt connected to the characters from the first book.  It reminded me that that’s why you write a series in the first place.  I did a podcast interview (also airing in the morning) with someone who loves the characters from my Chocoverse series, which reminded me that even if a book isn’t new, it can still be important, for having touched people.  So while I’m starting to accumulate a stack of books, it is worth it to put the maximum effort into each one.

I researched both chocolate and sea turtles for this book, and the experts I spoke with were both passionate about their chosen jobs.  I’m writing about subject matter that MEANS something to them.  Which makes the way I write it important.  I’ve done my best (and any remaining errors are definitely my own).  And really, your best is all anyone can do.  That was maybe the biggest takeaway from writing a book during a pandemic.  My creativity level has been somewhat erratic, and it took longer to write 70% Dark Intentions than it did to do Grand Openings Can Be Murder.  But instead of beating myself up over it, I considered it an accomplishment to have finished the project.  I am currently in the middle of drafting the third book, and it is coming along faster again.  I attribute this to being able to get out a bit in the last month and a half to do normal things like grocery shop and take walks in the local square and window shop.  These characters are still there in my head, and they still have unreached goals in their personal arcs for the series that THEY are very passionate about.  Which is a relief.  And it reminds me that with a series, you always owe both the readers and the characters a decent ending.  Which is still a couple of books out (at least) for the Bean to Bar Mysteries.  Because after everything you’ve put the characters through, the way you write THEM is important too.