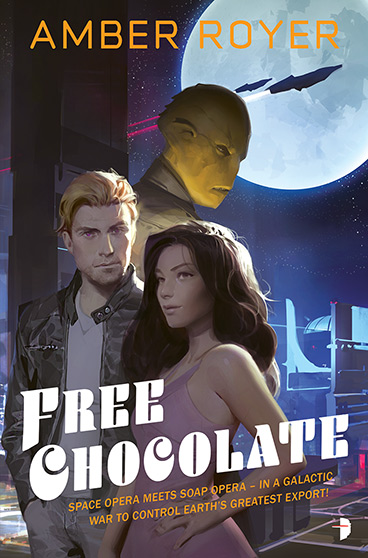 Forces array against her including her alien boyfriend and a reptilian cop. But when she escapes onto an unmarked starship things go from bad to worse: it belongs to the race famed throughout the galaxy for eating stowaways! Surrounded by dangerous yet hunky aliens, Bo starts to uncover clues that the threat to Earth may be bigger than she first thought.

Available now at Barnes and Noble or Amazon.

“In writing teacher Royer’s clever debut, humans have turned Earth into a fear-filled bunker after learning about the existence of aliens. Earth’s sole valuable commodity on the interplanetary market is chocolate, and some humans will do anything to preserve its value. Bodacious “Bo” Benitez wants to disrupt the system by smuggling cacao plants offworld, but doing so brings her face-to-face with her alien boyfriend’s hidden past, the man who murdered her chocolate-smuggling father, and the possibility of global war. The story is languidly paced and occasionally feels too drawn out, but Royer keeps things interesting by portraying how one tiny encounter can quickly spiral out of control in an interconnected galaxy. The aliens aren’t out to conquer Earth, just the markets, and they ruthlessly wield economics and niceties instead of lasers, to darkly comic and sometimes deadly serious effect. Trade-related science fiction is a small but solid niche, and Royer’s work fills it nicely. Agent: Jennie Goloboy, Donald Maass Literary. (June) — Publisher’s Weekly